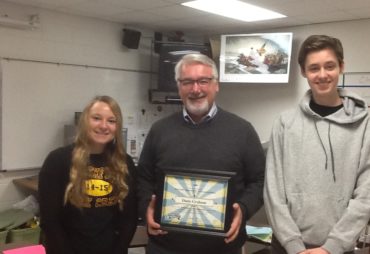 Northfield Mayor Dana Graham has received the Healthy Community Initiative’s “Making a Difference” Award for January. The award celebrates groups and individuals in the community who have a positive influence on Northfield youth.

Since taking office, Mayor Graham has made a priority of including youth as members on city boards and commissions in order to get a youth perspective on a wide spectrum of issues. In doing so, he has dramatically expanded the opportunities for youth voice in city government. Previously the main avenue for youth involvement was the Mayor’s Youth Council, a body of some 15-17 high school juniors and seniors. The council was founded in 2006 to assure youth input into civic affairs, especially those affecting youth.

Working with the City Council and city staff, Graham has created two slots for youth on each of a variety of the city’s boards and commissions, including the Park and Recreation Advisory Board, the Library Board, the Arts and Culture Commission, and the Human Rights Commission. The list continues to expand, and the positions are open to all high-school-age youth in Northfield.

“Kids all over our city are doing great things,” said Graham. “They are a resource we didn’t tap into enough, previously. We need to give youth more credit … they don’t just accept the way it’s always been done. They are not afraid to ask why. They challenge existing orthodoxies and make us think differently. They have a whole lot to offer.”

The youth members have been enthusiastically welcomed by the other board members and are engaging with the work of the boards, Graham said. He said he tries to attend all meetings of the Mayor’s Youth Council and loves engaging with the council members, whom he described as “very, very intelligent.”

Mayor’s Youth Council co-chair Jenna Scheffert said Graham is present at every meeting and is very willing to answer their questions and hear their feedback. For example, he adopted their recommendation of including two youth slots on each city board, rather than one, to decrease the discomfort of being the sole youth member in the room. “It’s great to have the city’s head figure respecting youth opinions and listening to us,” Scheffert said.

Graham said he hopes that by the time he leaves office, including youth on boards and commissions will have become an engrained practice, forming a routine part of how city business is done in Northfield.

The Healthy Community Initiative and the Northfield News present the Making a Difference Award cooperatively. If you know an individual or group that you would like to nominate for this award, visit www.healthycommunityinitiative.org for nomination guidelines and the easy-to-complete application, or find HCI on Facebook. Applications are accepted on an ongoing basis and are selected by a review team of HCI board members and local youth.